(For English see further below)

Recently I wrote about Compass Box and reviewed a couple of their whiskys- SWF Peat Monster and Flaming Heart, which you can read about here and here. Compass Box is neither a distillery nor a blenderhouse, but describes as "whiskey makers” of the founder himself. One of these whiskymakers is the founder and his name is John Glaser. As this “whisky company” fascinates me and their whiskey impresses me, I've felt I want to know a little bit more about its background. Therefore, I´m very grateful for having an interview with John.


Hi John! How did your career start in the whisky industry?


I fell in love with wine in college and decided to pursue a career as a winemaker.  After working in the retail and wholesale wine trade and spending a couple harvests in Burgundy, I was persuaded by a mentor at the time that becoming a winemaker would put me at the end of a very long line.  He convinced me I would be better off pursuing the business side of wine.  This I did, getting an MBA which resulted in a job offer not in wine, but in whisky, for a “little” brand called Johnnie Walker.


Can you tell us about what drive you to start Compass Box?


There were times when I was not sure why others in Scotland were not pursuing the same thing as me.  Why there were not more people starting independent Scotch whisky companies.  I spent a long time asking people in all aspects of the Scotch whisky business why this was.  Most said simply they wished that there were more of an entrepreneurial spirit in Scotland.  Many also pointed out the high barriers to entry in Scotch whisky, such as the high costs of maintaining duty-free warehousing and the high rates of excise duty on spirits in the UK.  It’s not easy.  But I was compelled to move forward in spite of all this.

Why did you choose the name Compass Box?
I originally was going to call the company ORION named after the constellation.  But that name was taken by a beer company in Japan.  While looking at lists of other constellations, I came across Pixus, which translated from the Greek refers to a Compass Box.  I like the idea of Compass Boxes because the old ones had a lot of craft value to them, having been carved by hand.  They were like pieces of art.


You have probably been through some really exciting experiences. Do you have some unforgettable whisky-related memory that you can tell us about?


There are so many.  But sharing my whiskies with Olivier Leflaive and his staff at his winery in Puligny Montrachet on a beautiful sunny autumn day many years ago has to be up there. My two passions merging.


Compass Box Whisky combine traditional manufacturing methods with a creative thinking to show what Scotch whisky can be.
In what way are you new thinking?


I believe that traditions evolve, and that we need to constantly bring new thinking to all the aspects of making Scotch whisky.  This is what I believe is the definition of craft—making things better for the sake of it.  To some people, this seem like innovation and new thinking; to me, it’s just the way a craftsman thinks and works. Let's face it:  everything evolves, everything changes, we are always learning.  Always.


What are your experiences of using a creative innovation as the driving force in a very traditional and normative whisky world?
We have some well-known run-ins with some people in Scotland for some of the things we have done and the ways in which we think.  But as I said above, this is our belief in how we need to think and behave to make great products.  There is no guarantee that the reputation of Scotch whisky will always be that of the “best” whisky in the world.  We have an obligation to ensure this reputation continues to be earned, in the minds of spirits drinkers around the world.


What difficulties have you encountered along the way and how did it affect you and Compass Box?
We obviously had our infamous banned Spice Tree which threw up obstacles with the Scotch Whisky Association. We had been using staves in our barrels, as winemakers have been doing for many years, to enhance the natural flavours from the wood and create a different finish. This was contrary to the way the Scotch Whisky Association viewed traditional practice.  We could not afford to fight this in court, so we discontinued production of The Spice Tree for several years.


In the intervening years I developed a way to get a similar flavour profile using new oak heads on the casks, and that is what we do now to produce Spice Tree.  I look back on my original interactions with the SWA with pride.  I was standing up for something that was right:  an evolution of traditional practice that yielded very high quality whisky.

What do you like most about your work as a whisky maker?
The ability to be creative.


When you create your recipe ideas to make a new whisky, is it mostly about chemistry or artistic talent?
Blending whisky is like creating a piece of music, you need to have an understanding of the parts that all the pieces play, the chemistry of the whisky if you will, but there is so much room for interpretation and this is where the artistry in blending begins.


If you had to choose a favorite among Compass Box whiskies, which one would it be?
This week it would probably be Great King Street Glasgow Blend.  But this changes constantly with the seasons, the occasions, my tastes.


Do you have any food pairing tips along with any of your whiskies that we just have to try?
Try exploring the world of cheese and whisky pairings.  We can heartily recommend Asyla with parmigiano reggiano, The Spice Tree with cave-aged cheddar and The Peat Monster with rich blue-veined cheese such as Gorgonzola.


If your tastes run to something a little sweeter, try the complex ginger spice flavours of The Spice Tree with puddings of a similar character. Anything with clove character (think Christmas cake), ginger cakes and breads and baked fruit puddings will be complemented perfectly by this rich malt whisky.


Above all, share & enjoy. How do you want to do that, with whom / what and where?
We are constantly looking out for new ideas for sharing and enjoying Scotch whisky. Given the breadth of styles in the Compass Box collection, we want everyone to have the chance to embrace beautifully made Scotch and inspire great times and conversation whether you’re out with friends, entertaining at home, or just celebrating the end of the day.
Finally, have you ever tried whisky from Sweden? If yes, what did you think of it?
I’ve tasted a few things, but it’s exciting to see how much is going on in the world of whisky in Sweden.  I am overdue for a trip to visit you and taste the whiskies!

Thank you so much John for such a nice interview! I will definitely try the cheese and whisky as there are two personal favorites I do not want to be without. What a perfect timing I'm going to Scotland next week so I can buy some cheese there for future whisky tasting. 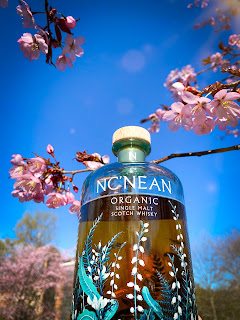